The role of timely referral to nephrologists in optimising the care of patients with chronic kidney disease often comes up in discussion. However, what is a ‘timely’ referral has been a matter of contention. Guidance has been provided by a number of organisations. There is unanimity that everyone with eGFR < 30 ml/minute/1.73m2 and those with heavy proteinuria should be referred to nephrologists. Some organisations put the referral eGFR threshold at 45 ml/minute/1.73m2. We make the assumption that only if these patients reach nephrologists, they will receive guideline-based care and would do better compared to not being referred.

The counterpoint to this is the availability of specialisys to take care of all of these patients who would seek care after referral. The severe shortage of nephrologists worldwide, especially in developing countries is well-known. With that in mind, it is important to develop referral policies that ensure that while all patients at risk of kidney disease progression or development of complications receive guideline-based care from trained nephrologists, those not at such risk do not overwhelm the system.

So, how to measure this risk?

Some years ago, The Kidney Failure Risk Equation (KFRE) was developed to predict the 2 and 5-year probability of developing kidney failure for patients with CKD stages 3 to 5. The equation is based on 4 variables—age, sex, urinary albumin-creatinine ratio, and estimated glomerular filtration rate (eGFR). This equation was developed primarily in Caucasian populations of Canada, but has been validated with high discrimination and adequate calibration in other populations including multinational set of 31 cohorts participating in the Chronic Kidney Disease Prognosis Consortium (CKD-PC).

They found that using the traditional criteria, the number of patients eligible for referral was 66,276. When the applied an additional KFRE risk criteria of at least 1% over 2 years to this eligible population, this number came down by 42.3% to 38,229. Crucially, they found that for each referral indication, the actual frequency of kidney failure over 2 years closely mirrored the predicted risk. Interestingly, rapid eGFR decline was associated with the lowest predicted 2-year risk for kidney failure. They also modelled the number of referred patients using different kidney failure risk thresholds and found that by applying a 2% 2-year kidney failure risk threshold (comparable to the 2.3% in the traditional lab-based referred population), selects 38% fewer patients for referral than the traditional system.

This is not the first such study, an Editorial accompanying the paper summarises the previous studies that have evaluated both the risk-based and lab-based evaluation criteria. They all show that use of risk-based criteria would substantially reduce the referral volumes. 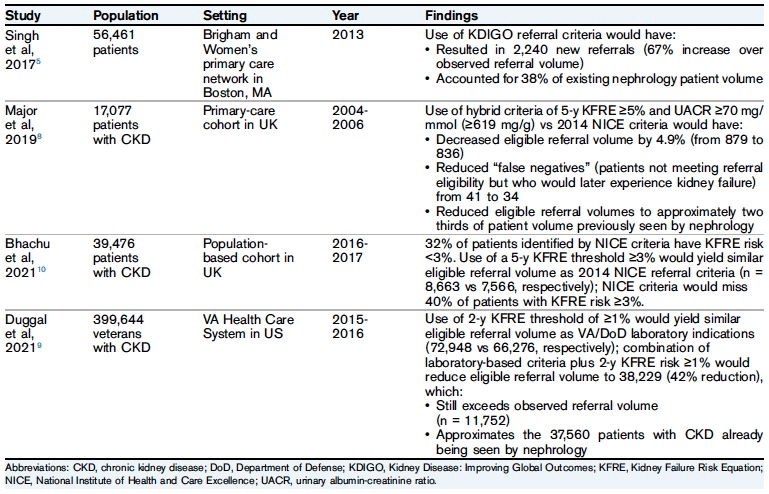 To be clear, this work does not propose a universally applicable referral threshold. Rather, such knowledge is helpful for health systems in deciding what is the appropriate threshold to set for nephrology referrals (rather than asking them to use a single lab-based cutoff), because the resources vary between systems. As the authors caution –

Health systems must make decisions on the appropriate allocation of nephrology resources based on their unique patient populations, weighing the potential benefits of trying to efficiently target referrals against the possible drawbacks.

The authors acknowledge that the KFRE predicts only one of the many adverse outcomes that patients with CKD can develop, and relying on this alone would disadvantage patients with other (less common) presentations or CKD complications from receiving proper assessment and treatment.

Therefore, while this approach is helpful in providing an objective and transparent way of making resource allocation decisions, it should be used with caution recognising that it does not solve or provide an ideal solution to manage nephrology referrals for all jurisdictions. All healthcare systems must work to augment their capacity so that eventually all patients who will benefit from the care of nephrologists get to see them.

As the Editorial accompanying the paper notes

The Editorial also suggests that in future, machine-learning algorithms that predict the likelihood of a patient having CKD could increase CKD recognition and early disease management by mining hospital records, automatically prompting CKD testing and, if needed, deploying guidance via a clinical decision support tool or e-consultation.

To have any realistic chance of implementing such approaches, we must augment the IT capacity in hospital systems, and strengthen the electronic medical records. Most countries and governments have pledged to implement this, but the process is going far slower than expected in most emerging economies. Paradoxically, these countries stand to benefit the most from the optimal utilisation of limited and expensive resources. Such an investment will likely lead to high returns and therefore should be urgently prioritised.

Another important caveat – this risk equation has not been validated in South Asian populations. There are important differences in the performance of tools used to measure kidney function between our population and those described from the west. For example, the currently used GFR estimating equations significantly overestimate the measured (true) GFR in the Indian population.

We hope that the ongoing Indian Chronic Kidney Disease Study would provide opportunities to fill this knowledge gap.