Of all the primary glomerular diseases, membranous nephropathy has seen the most happening that is relevant to clinical practice. These include improved understanding of pathogenesis through identification of target antigens, that can be used to make a diagnosis, influence therapy and ascertain response. Multiple clinical trials have also moved the needle on treatment – albeit more needs to be done in this area.

The test for circulating antibodies to the phospholipase A2 receptor (aPLA2R) has been quite influential for clinical practice. There are compelling data now that suggest that a positive test is diagnostic of membranous nephropathy. A systematic review had shown a diagnostic specificity of >99%. So the question arose whether the test should replace kidney biopsy (the current gold standard which is invasive, time-consuming, costly, and can lead to complications) has been debated in the community.

The relevant issue to consider here is – how does biopsy help aside from making a diagnosis? The most impactful will be any additional information that could influence treatment. Treatment decisions for patients with membranous nephropathy are based entirely on clinical and laboratory criteria, and not on biopsy findings. Hence, the latest KDIGO Glomerular Disease Guidelines say “A kidney biopsy is not required to conﬁrm the diagnosis of membranous nephropathy (MN) in patients with nephrotic syndrome and a positive anti-PLA2R antibody test.” Since this advice is not based on randomised clinical trials, it did not receive the status of a full recommendation but a practice point.

Recent studies have tried to validate this notion – in a single centre study from the Mayo Clinic, kidney biopsy findings did not provide any information that could influence treatment decisions in aPLA2R positive patients with eGFR >60 ml/min/1.73m2 in whom secondary causes had been excluded. In none of these, biopsy findings influenced management decisions.

Since this was a single centre study, the authors went out and collaborated with investigators from University Hospital Vall D’Hebron (Barcelona), and the Columbia University Medical Center (New York). Together, they collected information on 217 aPLA2R positive patients who had undergone a biopsy. They excluded a number of patients (those published in the aforementioned study, kidney transplant recipients, pediatric patients, and those with associated conditions including diabetes. This left them with 101 patients. When they considered only those with eGFR > 60 ml/min/1.73m2 (n=79), they were able to confirm their previous finding that the biopsy did not provide any additional information that would influence treatment.

It is not that there were no other findings (mostly immune deposits in other locations), just that none that would influence treatment decision.

In the group with eGFR <60, one patient showed interstitial inflammation, which would likely have influenced treatment decisions.

Another motivation to perform a kidney biopsy may be to determine the degree of chronicity, like focal glomerulosclerosis or interstitial fibrosis. According to the analysis of the Toronto Group, although both of those correlate with decreased kidney function, they do not necessarily affect response to immunosuppression.

Thus, this study provides additional evidence that a positive aPLA2R test, in the setting of preserved kidney function, no other causes or diabetes makes redundant the need for a kidney biopsy.

There have been quite a few trials evaluating alternatives to the steroid-alkylating agent-based protocol – initially devised by Dr Claudio Ponticelli mainly with that aim to minimise the side effects associated with these agents. Calcineurin inhibitors were tried initially, but were found to be associated with a very high relapse rate. In recent years the focus has been on B-cell targeted therapies and a variety of rituximab-based regimens have been tried.

The MENTOR trial found that two doses of 1 g rituximab administered 2 weeks apart (and repeated at 6 months in case of partial response) were non- was non-inferior to cyclosporine in inducing clinical remission at 12 months. It attained superiority at 24 months, mainly because of relapses in the cyclosporine group.

STARMEN compared sequential therapy with tacrolimus and rituximab (hoping to combine the best of both approaches) with the modified Ponticelli protocol and found that the latter was better in remission of nephrotic syndrome at 24 months. aPLA2R titers decreased in both groups but the likelihood of antibody disappearance was higher in the corticosteroid-cyclophosphamide group.

The 2021 KDIGO guideline recommends using any of the 3 approaches – alkylating agent/steroid-based, rituximab and CNIs with the choice of treatment depending on the risk estimate.

While acknowledging the proven efﬁcacy of alkylating agents in preventing kidney failure, the current recommendation gives more weight to the severe short- and long-term side effects associated with the use of these agents, which worry clinicians and patients.

In practice, these agents are not used in the regimented way described in these trials. A recent publication presents the experience of treating 60 patients with rituximab combined with an initial short course of low-dose oral cyclophosphamide and a course of rapidly tapered prednisone at the Vasculitis and Glomerulonephritis Center at the Massachusetts General Hospital.

The patients were considered at high risk of progression due to persistent or recurrent nephrotic syndrome, a recent decline in eGFR, or complications that forced therapy. The treatment regime was as under – 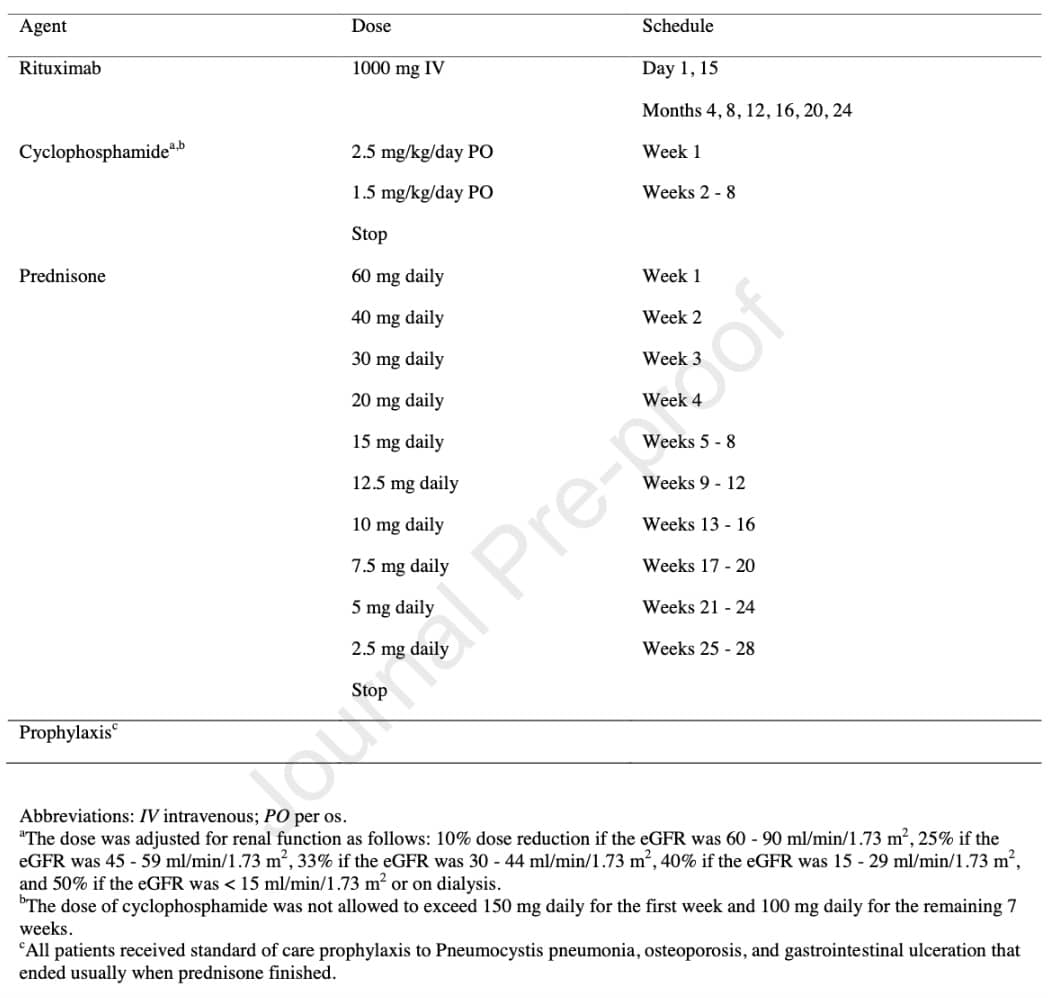 Rate of remission was the primary outcome.

Over a median follow-up time of 38 months (IQR, 25 -62), 100% achieved partial and 82% complete remission. There was no difference in time to CR when stratified by anti-PLA2R status, nor in patients receiving this regime as initial treatment and those receiving it as second-line therapy. 100% patients reached immunological remission at six months.

There were 4 relapses, all after onset of peripheral B cell reconstitution.

Most of those who failed to attain CR had had pre-existing renal damage and/or baseline advanced renal insufficiency, suggesting the possibility of irreversible structural disruption which prevented entry into clinical remission despite immunological response.

There were 8 serious adverse events (SAEs), the most common being late-onset neutropenia from rituximab (n=5).

These findings are better than those shown in MENTOR and GEMRITUX. The authors attribute this to continuous B cells depletion due to RTX given for 2 years, which suppressed the repopulation of the lymphocyte pool.

Even though cyclophosphamide induces a quicker and surer immunological as well as clinical remission, practice practitioners to remain fearful of the long-term adverse effects of this drug, in particular, cancer. In this study, the cumulative CYC dose was 5.95 grams over a 2-month duration.

It is what remembering that the alkylating agent-based regime is the only one shown to prevent kidney failure so far, and it is quite likely that we will end up with some sort of combination approach.